The Sunday Sermon: Home by Another Way 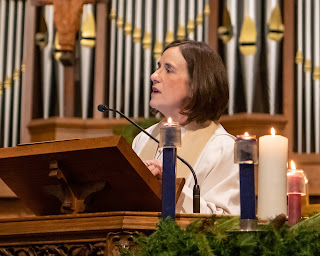 Today is the second Sunday and 12th day of the Christmas season. We won’t officially celebrate the Epiphany until tomorrow. But today we are peeking over the fence and seeing the wise ones approach. You may immediately interpret that as the three Kings, but take a closer look at the Gospel and you will notice that Matthew never says there are three of them; he never says they are kings; he never even says they are all men. Just “magi”, a term that may describe Zoroastrian priests from Iran, but is often translated “wise ones”. The wise ones who read the stars and realized that something utterly new was happening, somewhere in the world, something they didn’t yet understand. Their reaction to this new thing was not fear but curiosity. So the wise ones set out to learn more about this new king, to offer gifts and to pay homage. How ironic today that those chosen to reveal Christ to the world were likely from Iran.

King Herod, on the other hand, wasn’t a wise one. When he learned whom the wise ones were seeking he was frightened; and when Herod was frightened, his courtiers - “all of Jerusalem” as it says - quaked in their sandals, because a frightened tyrant is a dangerous and unpredictable creature. Fear drives violent and destructive actions. Fear holds back progress. Fear imprisons people within their own assumptions.

Assumptions led the wise ones to Jerusalem, assumptions that any king born in Israel would be found in the royal city of David and that the current ruling family would know all about it. But Herod was shocked by this news of a king. He was afraid, because another king must mean a threat to his power. And so, as he directed the wise ones to Bethlehem in the land of Judah, he sneakily asked them to find the child and let him know the address. Herod of course had no intention of paying homage to this new king: his plan was to send a death squad out as soon as he knew where to send it. He wasn’t about to let a rival dynasty challenge him. And his fear led him to an appalling act of mass murder, after the wise ones took a different route home: he had all the babies in Bethlehem killed, in what we call the martyrdom of the Holy Innocents.

We know that the new king in Bethlehem wasn’t interested in taking Herod’s throne. He was a different kind of king, a king whose kingdom didn’t depend on military force and oppressive taxation. But Herod was right to be alarmed, because this new king brought good news to the poor and sought to lift up the lowly. His kingship would be a threat to the status quo, would call on those with privilege to share their power with the powerless, would call on those with plenty to share their abundance with the hungry, would call on those whose influence depended on unthinking obedience to open up their structures of governance.

In our own time we are seeing a backlash to reforming change. The Herods of our day and their courtiers are frightened. Their influence is no longer unquestioned. They are being held accountable for abuses. And so, like Herod, they are reacting with violence. The media tell the story: domestic terrorism, hate crimes, murders of transgender persons, restrictive healthcare laws that target women, all of these are signs that Herod is frightened by the new thing that is coming to pass. And still, today, those who follow the star and seek the Christ strive to change the world, to find a different way, a way of peace, justice, and love.

Back in Bethlehem, the wise ones found the baby and his mother. They knelt down and worshiped him, recognizing and accepting his authority. And they offered symbolic gifts: gold, for royalty, incense, for divinity, myrrh, for mortality, conveying their astonished understanding that this child embodied the presence of God among humanity, Emanuel, God with Us.

When I lived in Virginia I used to go to a chamber music workshop every summer. On the first day of the workshop I would hurry down interstate 81 to Lexington, getting there as fast as possible, so as not to miss the opening events. But at the end of the week, after 8 or more hours a day of playing music, I would take my time, meandering north on the original coach road, Virginia route 11, that wends its way through the little towns of the Shenandoah Valley, relishing a Sunday morning when I didn’t have to be anywhere, enjoying the sleepy beauty of midsummer, stopping at farm stands for fresh corn and fruit. The week of music changed me, slowed me down, invited me to go home by a different way.

The wise ones went home by a different road. They didn’t visit Herod again: their eyes had been opened and their hearts changed. They no longer cared to spend time in royal palaces, now that they understood about this new kind of king. They were warned that Herod and his people intended harm to the holy child, and they weren’t knowingly going to be party to any violence. The Epiphany - the showing of Jesus to the world - was in their hands, and they found a different way.

The Epiphany of Jesus isn’t just a cosy story of mysterious visitors bearing gifts. The tragic fate of the Holy Innocents tells us as much. We learn that making Christ known to the world is not without risk. Once we have encountered this new king, our lives will never be the same again. We must take a different road, countering the prevalent culture of violence and exploitation. Our Presiding Bishop encourages us to take a different road, the Way of Love. It’s the way that Jesus took as he taught and healed. It’s the way the disciples took as they went out two by two to change the world. It’s a sevenfold rule of life in which we turn from our old ways to learn about God’s presence, we commit to prayer and worship, we bless the world as we go forward, and we rest in God’s love.

Each of us will practice the way of love in our own unique way, drawing on our gifts and experience. Like the wise ones, we will encounter the Christ, worship him, and make him known, as we turn from old ways of selfishness and fear and find a different way home.

Epiphany: a showing forth. In this new year, we are called to be Epiphany people, to show forth the light of Christ in the world and to find the path that God has planned for us. As the Psalmist reminds us, Happy are the people whose hearts are set on the pilgrim’s way. 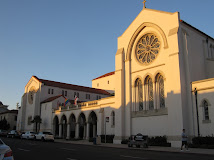